Sometimes air pockets will form in the pipelines of steam or hot water heating and cooling systems and retard circulation. One method of eliminating these air pockets is to install one or more air eliminators at suitable locations in the pipeline.

An air eliminator (or air vent) is a device designed to permit automatic venting of air. These automatic venting devices are available in a number of sizes, shapes, and designs. Not only are air eliminators used for venting convectors, baseboard radiators, and other heat-emitting devices; they are also frequently used for this purpose on overhead mains and circulating lines.

A float-type air vent (see Figure 10-45) consists of a chamber (body) containing a float attached to a discharge valve by a lever assembly. The float-controlled discharge valve vents air through the large orifice at the top. The float action prevents the escape of any fluid, because the float closes the valve tightly when it rises. When the float drops, the lever assembly pulls the valve from its seat, and the unit discharges air. 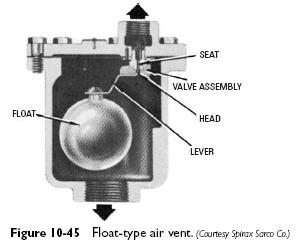 In some special applications, it is necessary to use an air eliminator that will close when the vent body contains steam or water and opens when it contains air or gases. Combination float and thermostatic air vents have been designed for this purpose. 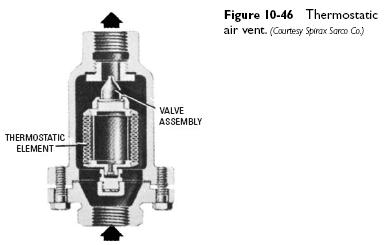 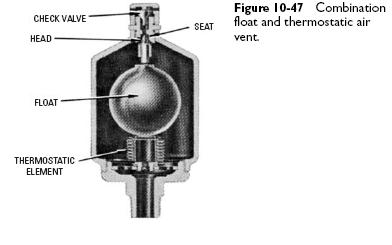 View all posts by Albert